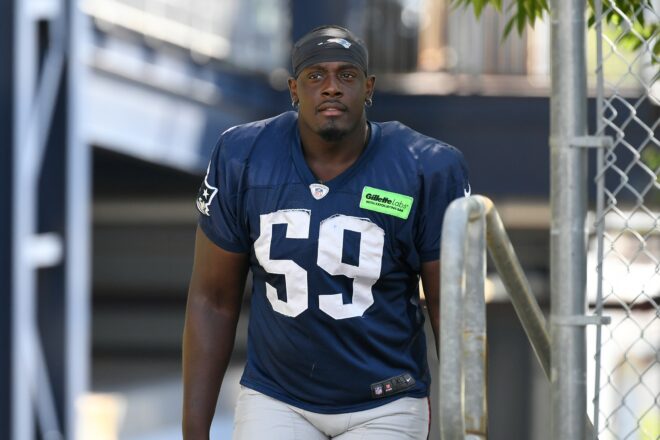 Some news and notes from the Patriots this Tuesday:

– The New England Patriots were back on the pitch yesterday as they prepare for joint training sessions against the Carolina Panthers, which will begin today. Hopefully it should be a productive week as it gives both offense and defense extended live reps against an opponent as both teams continue to prepare for the season. With both Mayfield Baker and Sam Darnold close at hand for Carolina, it should also add another interesting twist to the next two days as both players battle for a starting role and this could be a critical time for veteran quarterbacks. According to reports from Carolina, the two are expected to split reps evenly as the Panthers continue to value both players.

– The Patriots quietly dealt with a few injuries following Thursday night’s game against the Giants, but one appears to be late in the season. defensive back Joejuan Williams reportedly suffered a shoulder injury in the contest that will sideline him for the year, which could be his last in a Patriots uniform. Williams was in the final year of his rookie contract and needed a solid season to potentially prepare him for another stint in New England or elsewhere. Instead, Williams was inconsistent in camp and didn’t exactly have a strong performance against the Giants. He seemed to be a long way off the list and now he will avoid that designation instead. The bad news is that it’s probably safe to say that the former 2019 second-round pick, who will be a free agent after the season, will likely be looking for a new team this offseason. With Wiliams sidelined, the rookie Marcus Jones — who didn’t play in the preseason opener — got a few more reps.

– Offensive tackle Isaiah Wynn was sidelined again Monday, as the Patriots also suffered injuries along the offensive line. Justin Heron, who committed two false start penalties on Thursday night, was hurt in the fourth quarter on the team’s last touchdown and also wasn’t in practice Monday. With Wynn and Herron sidelined, it saw Yodny Cajust getting some extra reps, but the fact that they have two injuries in that position will remain something to watch over the next two weeks.

– Also missing Malcolm Butler, who looked a little rusty on Thursday night as he continues to prepare for his first NFL season in two years. Butler ended the night with a tackle and a fumble recovery, but he had a notable missed tackle early in the competition that ended up reminding him he’s not quite back to where he should be yet. This is obviously a critical time for Butler, who could use the reps and any kind of extended absence would certainly be detrimental, especially given what is already a shortened pre-season. Butler’s absence opened the door to additional reps for the rookie jack joneswhich has proven itself during its debut in exhibition.

– Wide Receiver Nelson Agholor had a good day on Monday, carrying a few one-handed holds including one against jonathan jones, who had a pretty tight cover against him. The veteran receiver has looked more comfortable in his second season and has had a solid training camp so far. Despite persistent trade rumors, Agholor still looks set for a roster spot and, barring a trade offer that would be too good for Bill Belichick pass, it would be a surprise not to see him with the team to start the season.

– Belichick spoke about the benefits of joint training on Monday, saying the ability to play against another team adds “less predictability” for players and amplifies their focus. “There are so many things,” Belichick said. “Individual meetings are good. We have been working against each other for a long time, so the new individual matchups, the patterns are different. We’ll see different x’s and o’s, but also maybe techniques on how guys rush passes or routes or things like that. And, I would say, less predictability of practice. We kind of know what’s on the other side of the ball and what we can and can’t do. Some things we’re not going to see on the other side of the ball. With a new team, everything is a bit new, so it keeps you on your toes and forces more communication and more awareness, and we need that.

– Another interesting thing that came out of yesterday’s press conference was the fact that Belichick praised the sixth-round pick Sam Robert, which surprised fans after seeing some action early in the game and getting the most out of it. He’s been disruptive and even helped set up a sack and so far he’s been quietly a player who has done some good things. “Sam, like a lot of our rookies – I think we could really say that just about all – he’s quick, he’s definitely had some good times and some good plays,” Belichick said. “It’s a big leap for him: the level of competition, the scheme, everything else. He was one of the best where he played, and that’s reversed now. He’s a talented guy, he works very hard. He has improved a lot. It has plenty of room to grow. His fundamentals and his recognition and obviously his experience in the league – he’s got a long, long way to go on that. But, he’s better every time he comes on the court, he’s healthy, he’s been on the court, he’s gotten a lot of reps, that’s how you get better. I like working with him, but we’ll see how it goes. He has a long way to go, but he is making a lot of progress.